Paper Dolls is an artistic response to an aging bachelor's narcisstic behavior of constantly sharing about current and past lovers to elicit envy with prospective lovers. Material and shallow characteristics, such as looks, skin tone, physical shape, age, professional occupation, prestige and dress are the only criteria for selection. He pursues women by appearing to show intense interest in them by showering them with constant admiration, flattering words, attention and affection to lure them into his trap. However, the tables quickly turn which leaves his lovers on a hamster wheel, constantly chasing the high of the original seduction by feeding a fragile ego, competing with other women in his life, and attempting to satisfy his whims only to be either degraded or ignored by the once romantic and attentive suitor. Just as he admires their attractive characteristics, he then becomes their ultimate critic in order to justify his willingness to exploit them for his purposes and his unwillingness to commit to any of them in the end for a mutually satisfying, healthy relationship.

The artwork attempts to exhibit beautiful, but rather artificial views of these women from his perspective, a "paper doll" if you will. Something alluring to seduce but ultimately a toy to play with, avoiding the real work of healing mental/emotional childhood wounds which prevents him from becoming vulnerable to real, "grown-up" love. 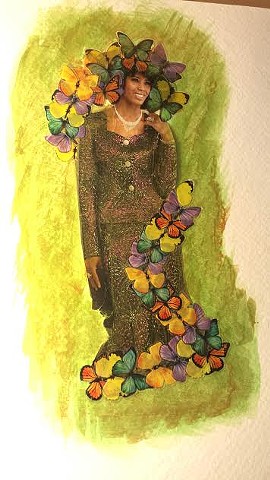 (Bunmi) is 90% and well-behaved...
Collage/Mixed Media 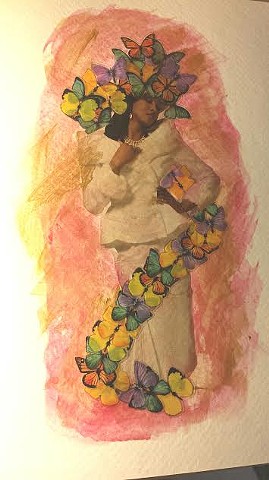 (April) Had Me At Hello
Collage/Mixed Media 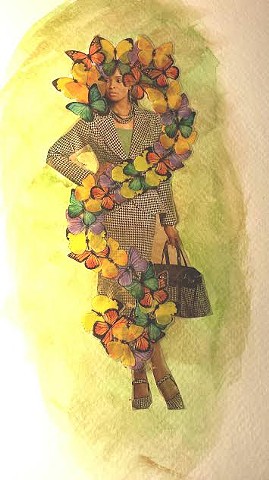 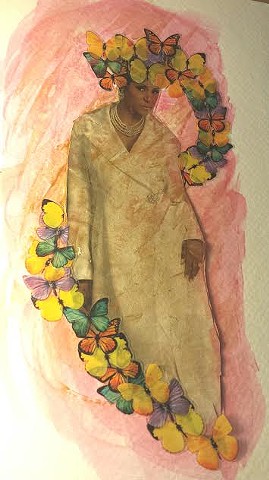